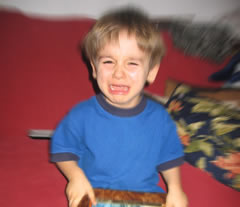 EVERY SINGLE MORNING, without fail, no matter who takes him to school, no matter how early or late we get there, he cries for 10 minutes after we leave.

We have tried every trick we can think of, including ignoring his mild hysterics when we go. Any hope I had that he would outgrow this behavior has vanished.

I do not know what arrangements you have for your other two kids, but it seems that the boy was not ready to separate from you at age two; he needed more time with you to establish a secure sense of attachment to you.

In addition, when his younger two siblings arrived, he was probably jealous of the attention you gave to them. So try to carve out some special time to spend with him (just the two of you) to establish a stronger and more secure sense of attachment (you can call it love) between you and your first born son.

This is important for his future relationships as an adult, because a child’s feelings in the early preschool years form a template for his feelings later in life.

You can learn more about the importance of the mother-child relationship in my book, The Drama of the Mother-Child Bond: What Every Woman Should Know about Motherhood, Career and Children available on Amazon.

Because we #caregivers #alzheimers #dementia thrive on #goodnews, here’s some. My #specialneeds sister Maggie’s 50th B-Day party arrived & as she wished, it featured @shaunpcassidy on the cake, the decor, on screen & Shaun—decent kind human —called her on the phone himself.💕💜💕

Are you familiar with this #dementia warning sign? 📝 If you or someone you love is starting to experience extreme difficulty in writing when there wasn't any before, you may want to see a medical professional. Call our Helpline at 888-280-6055 for recommendations. 📞 #FightALZ

SO important. Some express surprise when Dad says he doesn't recall a person/event. They're convinced providing more detail will help. "Don't you remember he was married to Ethel?" or "Remember that was the day Uncle Ian broke his arm?". I swear I can see the panic in Dad's eyes. https://t.co/7I9wuK7YLX

Reply on TwitterRetweet on TwitterLike on Twitter2Twitter
Load More...